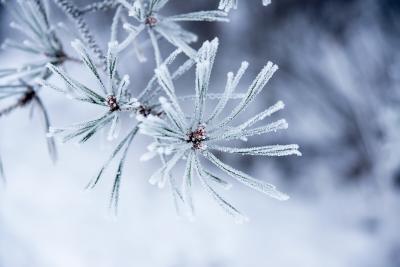 Question from a reader in Pennsylvania.

Insects and other arthropods have a variety of tactics for overcoming cold temperature during winter.  Depending on the species, they may overwinter as a specific life stage (egg, nymph/naiad, larva, pupa, or adult) in order to make it through the colder months.

Some insects reduce the water content of their body and increase glycerol within their system.  Glycerol can act like an "antifreeze".  Some species will form clusters  or vibrate muscles in order to raise temperatures and survive.  Many move their protected location to places like deep into the soil, a tree-hole or log, under insulated leaf litter or even your home.

As a general rule, insects are able to survive winter when temperatures do not fluctuate between thaw and freeze often.  They have their best chances when temperatures remain stable.  Extreme colds may also have a negative effect on certain insect species populations.

According to a recent press release from the National Pest Management Association (NPMA), many harmful and invasive insect species may have been killed due to the abnormally cold temperatures caused by the recent polar vortex.  Read more from NPMA here:

Send Us Your Question!